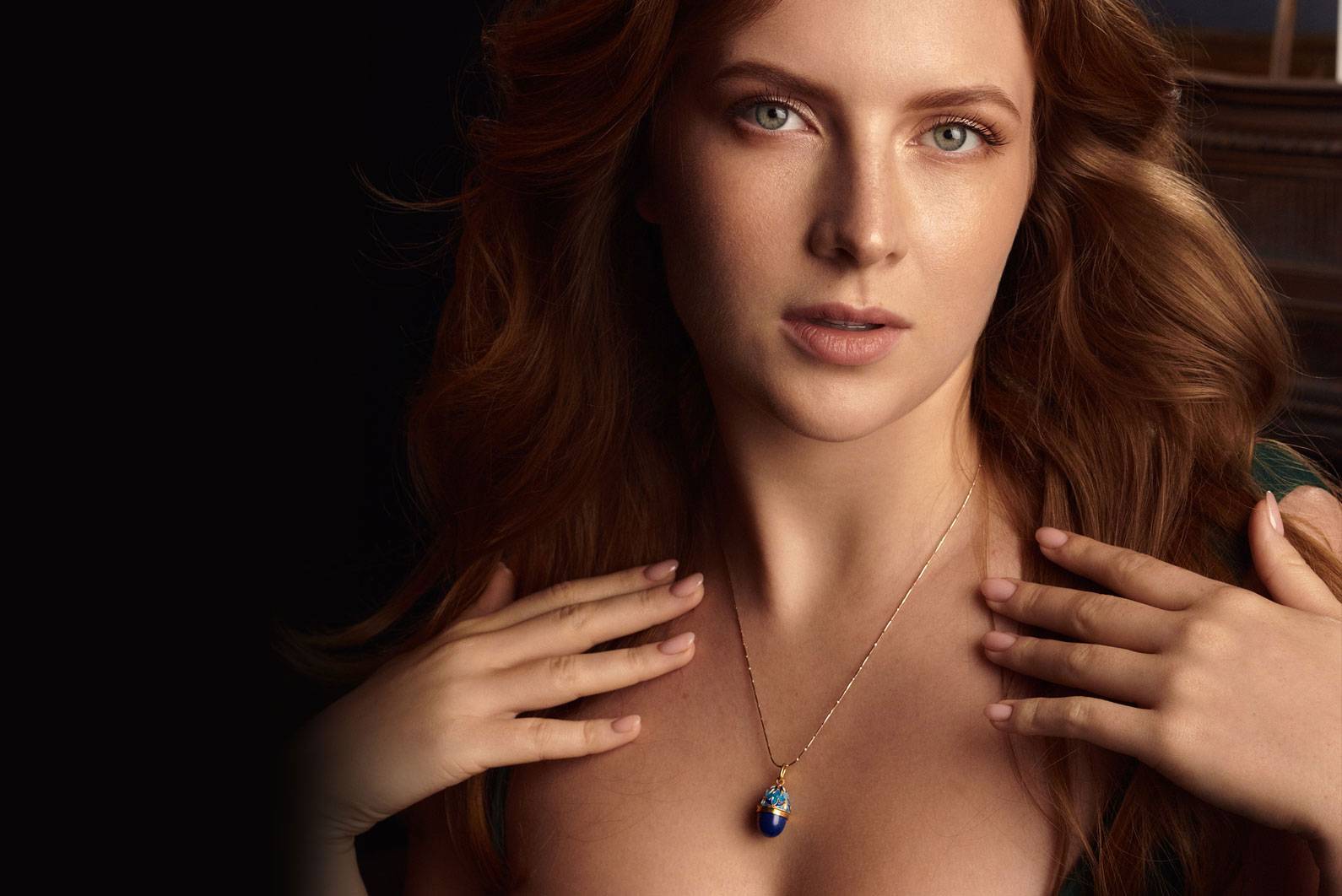 This Easter, as is tradition with any Faberge piece, you can capture all the imagination and elegance of the famous Imperial eggs with our highly sought-after Faberge egg pendants. These pieces create a special bond between the wearer and yourself, and they’re a gift that will be remembered forever.

IMPERIAL LUXURY IN THE SHAPE OF FABERGE EGGS EASTER

The Faberge eggs are among the most famous, exquisite, and impressive pieces of decorative works ever produced. Their story is as romantic as it is intriguing, and there can be few of us not taken by the masterful craft exemplified by those that remain.

The Faberge name is a famous one – and rightly so. These outstanding gifts were, quite literally, fit for royalty, and their beauty cannot be understated. Complex, often bejeweled, and holding a personal secret within, the eggs were initially created as gifts for the wives and mothers of the famous Romanov family.

This Easter, as is tradition with any Faberge piece, you can capture all the imagination and elegance of the famous Imperial eggs with our highly sought-after Faberge egg pendants. These pieces create a special bond between the wearer and yourself, and they’re a gift that will be remembered forever.

Gift a piece of history and create a special piece of heritage this Easter. Let’s take a closer look at their story, the different types of pendants available in our Sapsana store, and how to choose one that suits the style of your partner or loved one best. 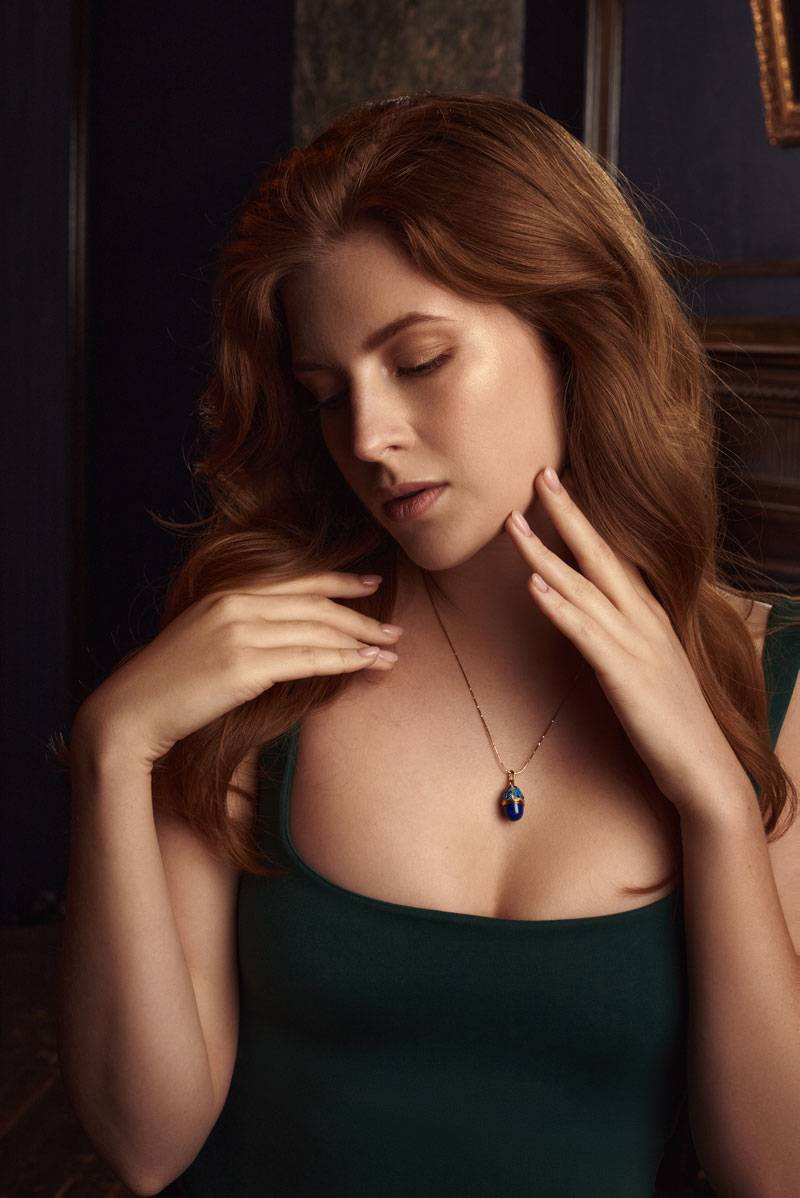 WHAT’S THE STORY BEHIND THESE BEAUTIFUL PENDANTS? 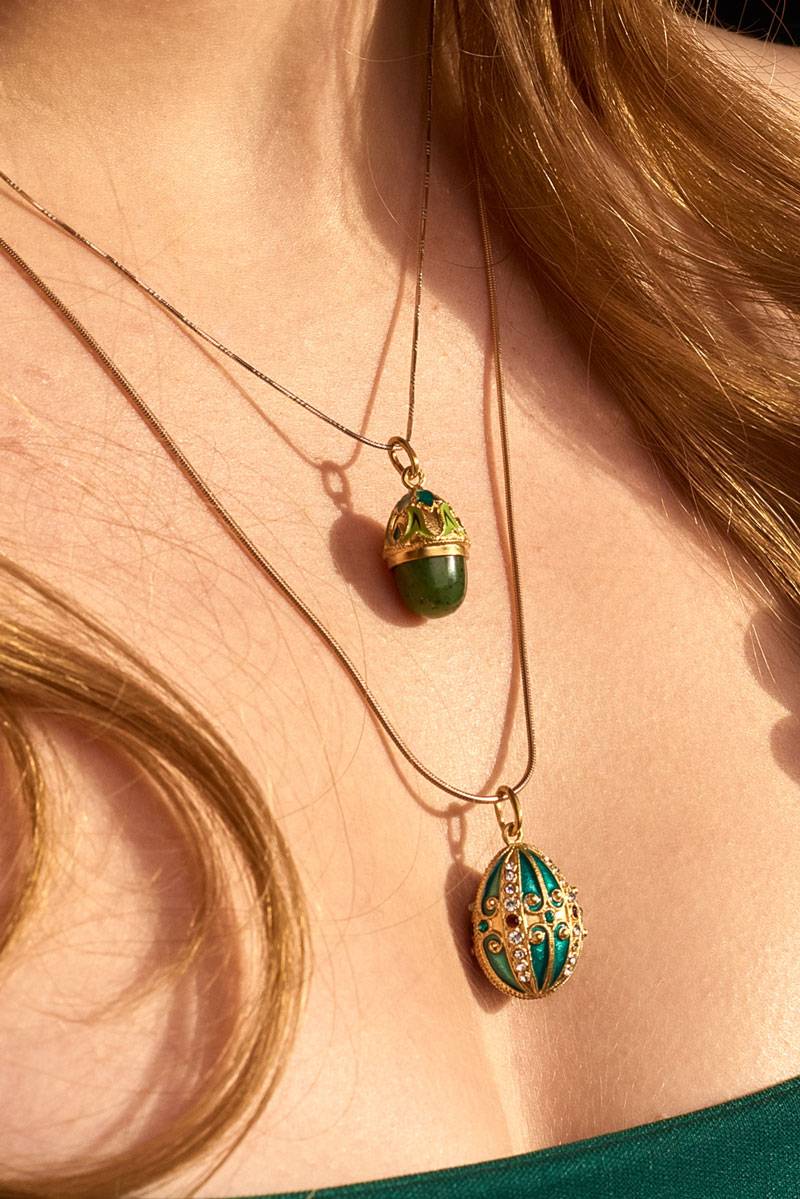 Czar Alexander III, as far back as 1885, is credited with beginning the story of the now infamous Faberge eggs.

In the spring of 1885, he was determined to surprise his wife Maria Feodorovna with a unique, splendid, and dazzling gift. The Russian empress would get her reward when the Tsar turned to Peter Carl Faberge, an ingenious craftsman whose work would soon go down in history.

The goldsmith had taken over his father’s House of Faberge jewelry business just a few years previous, and he was about to transform the business beyond his father’s wildest dreams.

Peter Carl Faberge understood the importance of creating something unique and meaningful. Instead of opting for a highly-decorated ring or showpiece necklace, he decided to create something which, on first sight, was notably plain.

The beauty lay within: inside a small (around two and a half inches tall) enameled egg was a golden yolk and, within it, a tiny golden hen. Incredibly, beneath the tiny hen was a diamond crown adorned with a ruby pendant. It was this careful attention to detail and grandeur on an unthinkably small scale that set the egg apart from any other decorative piece. 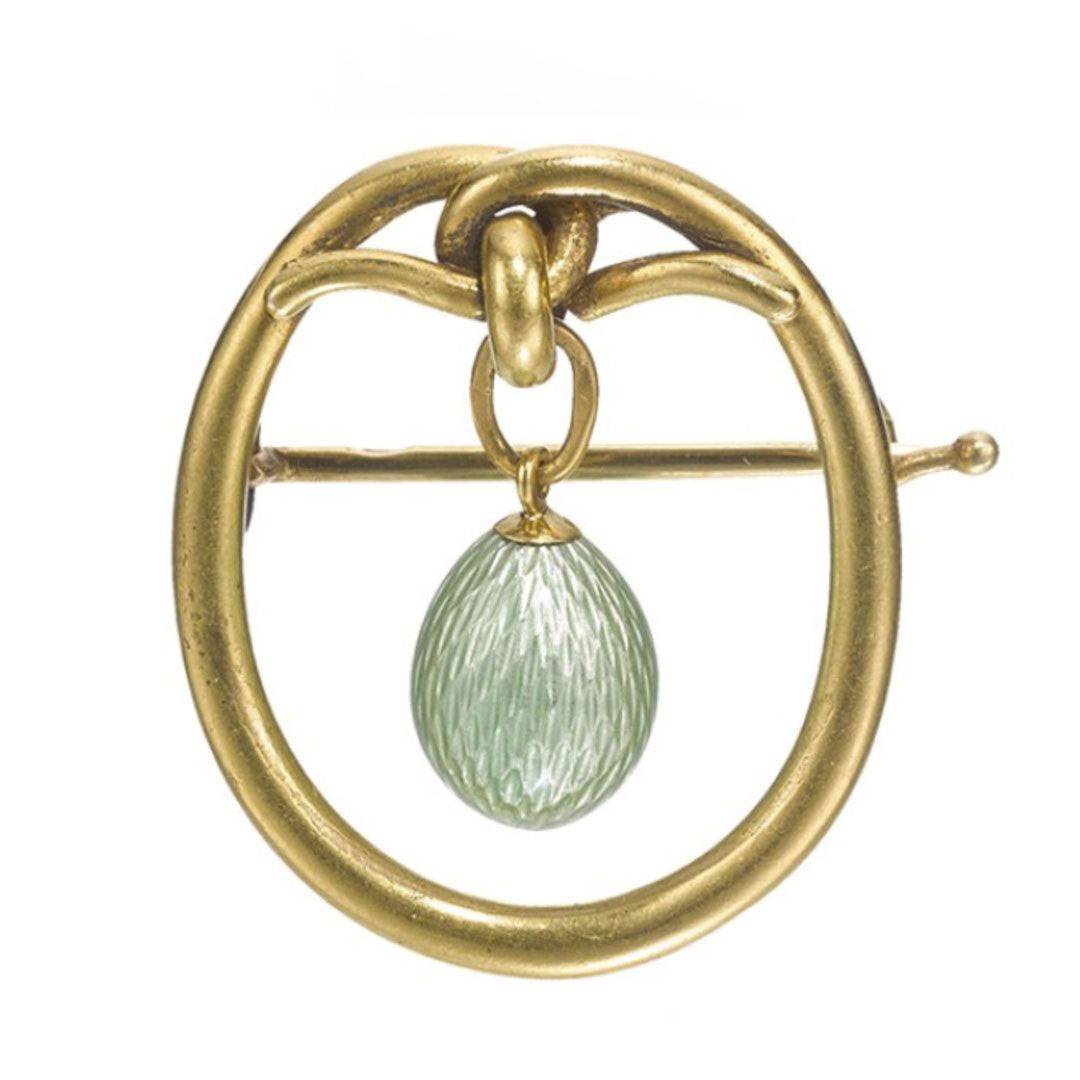 Eggs could also be included in brooches, for example, a sample of gold brooch # 2930, reminiscent of a wheat pretzel, decorated with a miniature Faberge guilloché egg from the workshop of Fyodor Afanasyev. 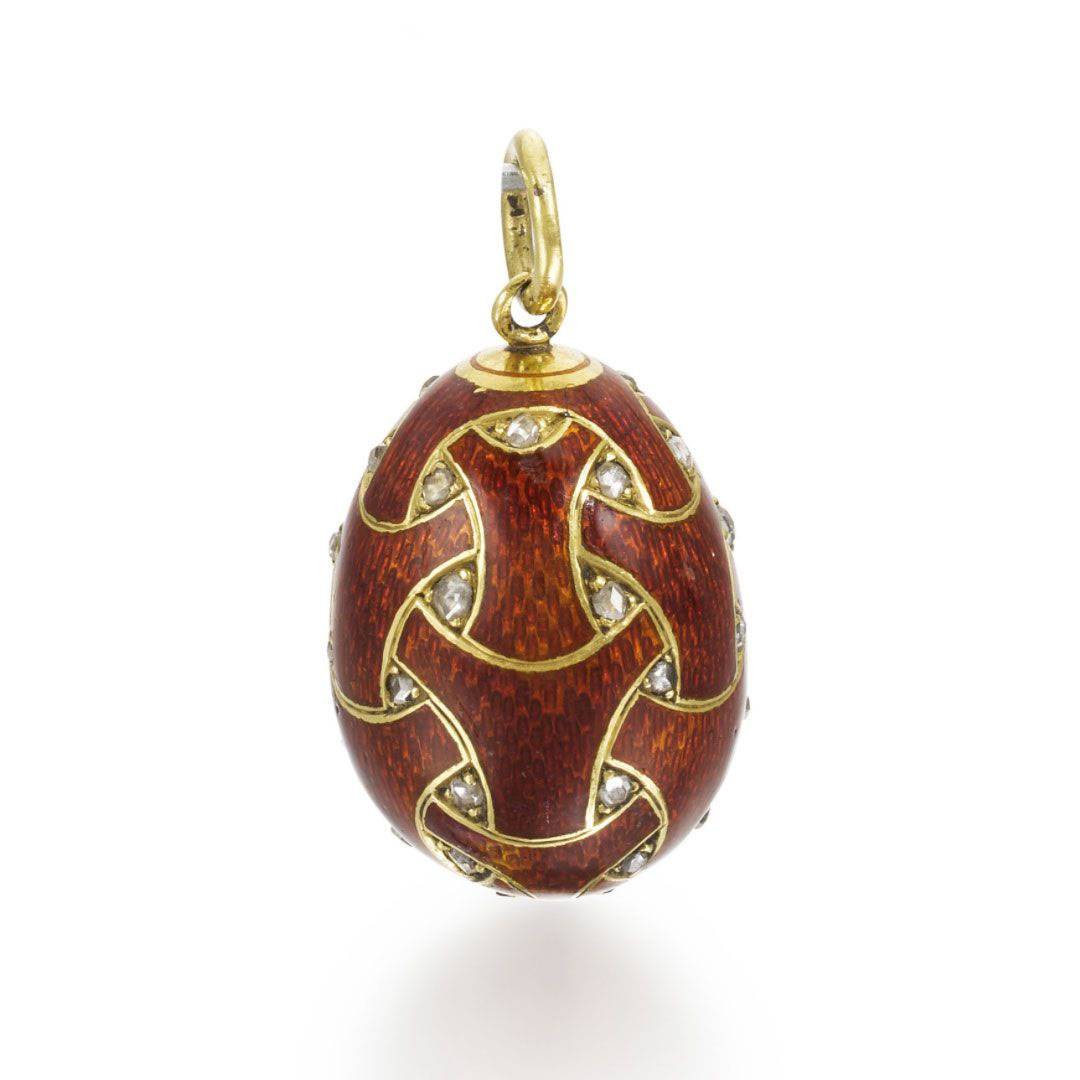 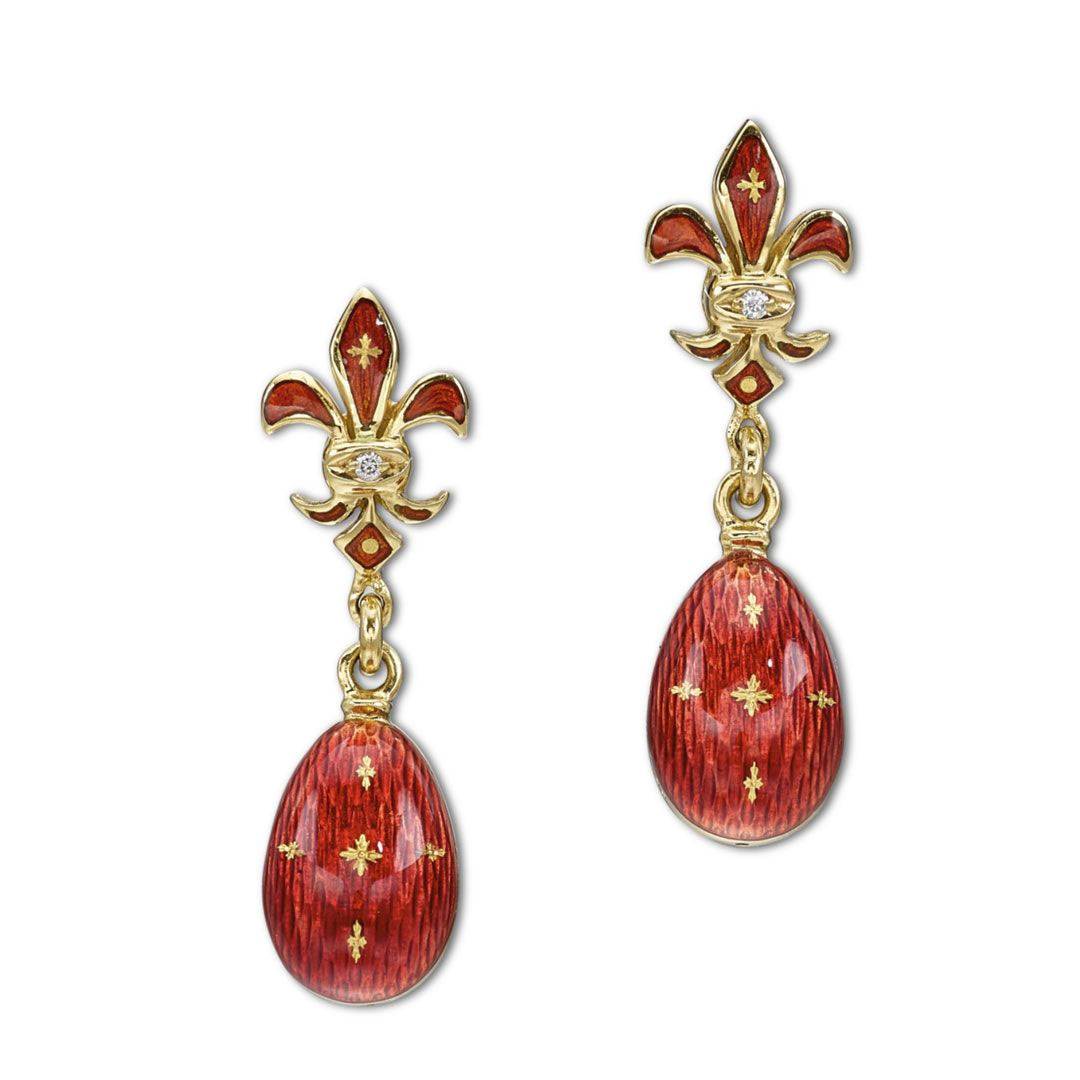 Photo from the official website of the auction house Sotheby’s. Gold earrings with diamonds and guilloche enamel from the master Victor Mavr, for the Fabergé Jewelry House. 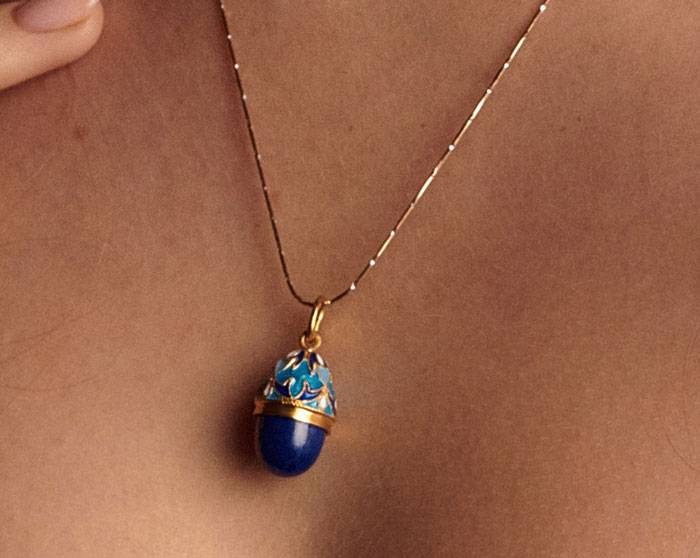 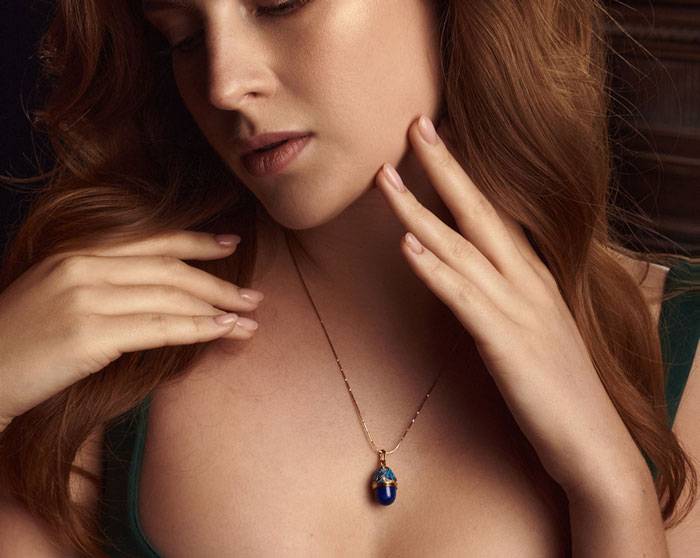 This piece is now known as the Hen Egg, the first of more than 50 pieces of art that Faberge would go on to produce. It goes without saying that the Russian empress was suitably taken with her gift.

Each Easter, under the Romanov rule, Alexander III (and later Nicolas II) would ask for the famous craftsman to produce something special for their wives. As the years moved on, they recognized the importance of leaving Faberge himself with complete creative freedom. When it came to presenting their gifts, even the Tsars themselves didn’t know what the gift would involve – it was a surprise for everyone except the workers in Faberge’s factory.

Using all his creative flair and intelligence, Faberge continued to produce extremely intricate, personal, one-of-a-kind gifts that held significant personal meaning. And, as always, there was a tiny hidden surprise within the egg itself.

The eggs each took between one and two years to produce. Among them the Imperial Coronation Egg is perhaps the most famous, produced in 1897 for Alexandra, the wife of Nicolas II.

This breathtaking egg, made in gold, is embellished with yellow enamel and even includes a black double-headed eagle. Inside is a golden carriage.

Many of the eggs are still in existence today – for a small handful, their whereabouts is a complete mystery.

You can capture the beauty, elegance, and significance of these famous eggs with our Faberge egg pendants this Easter. 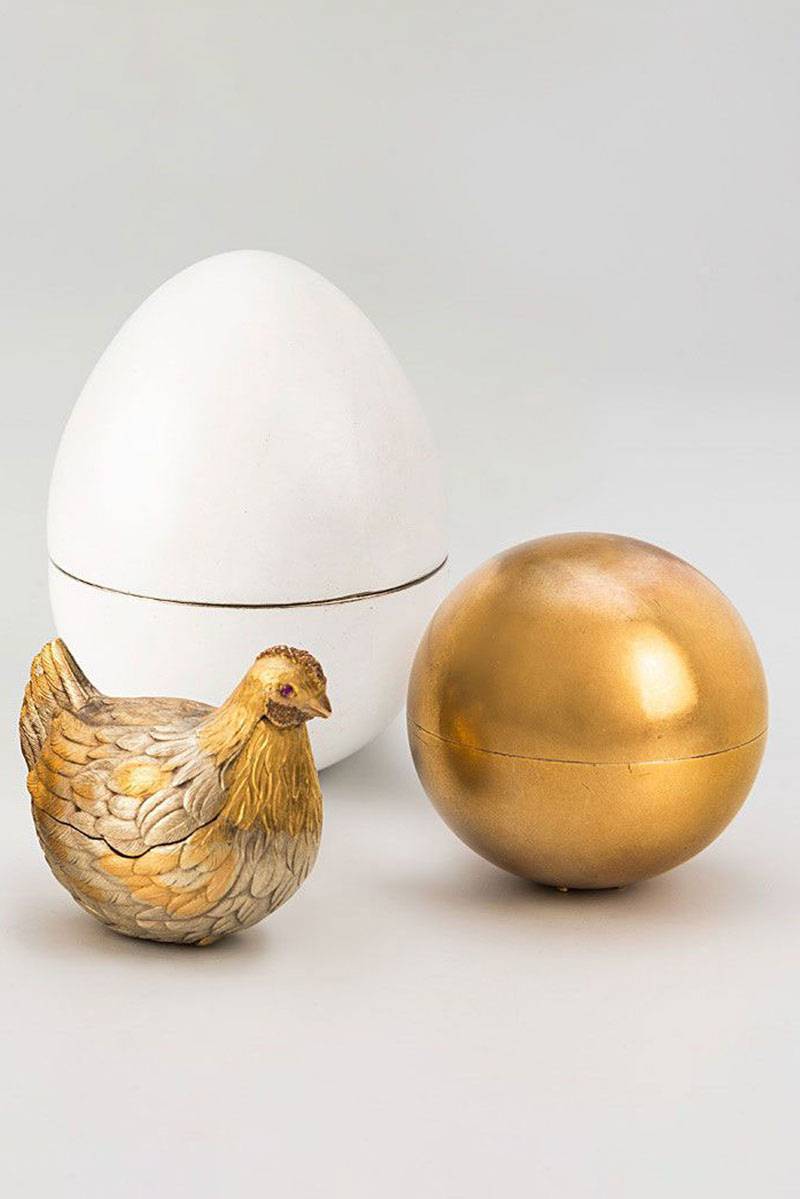 WHAT MAKES THESE GIFTS SO SPECIAL? 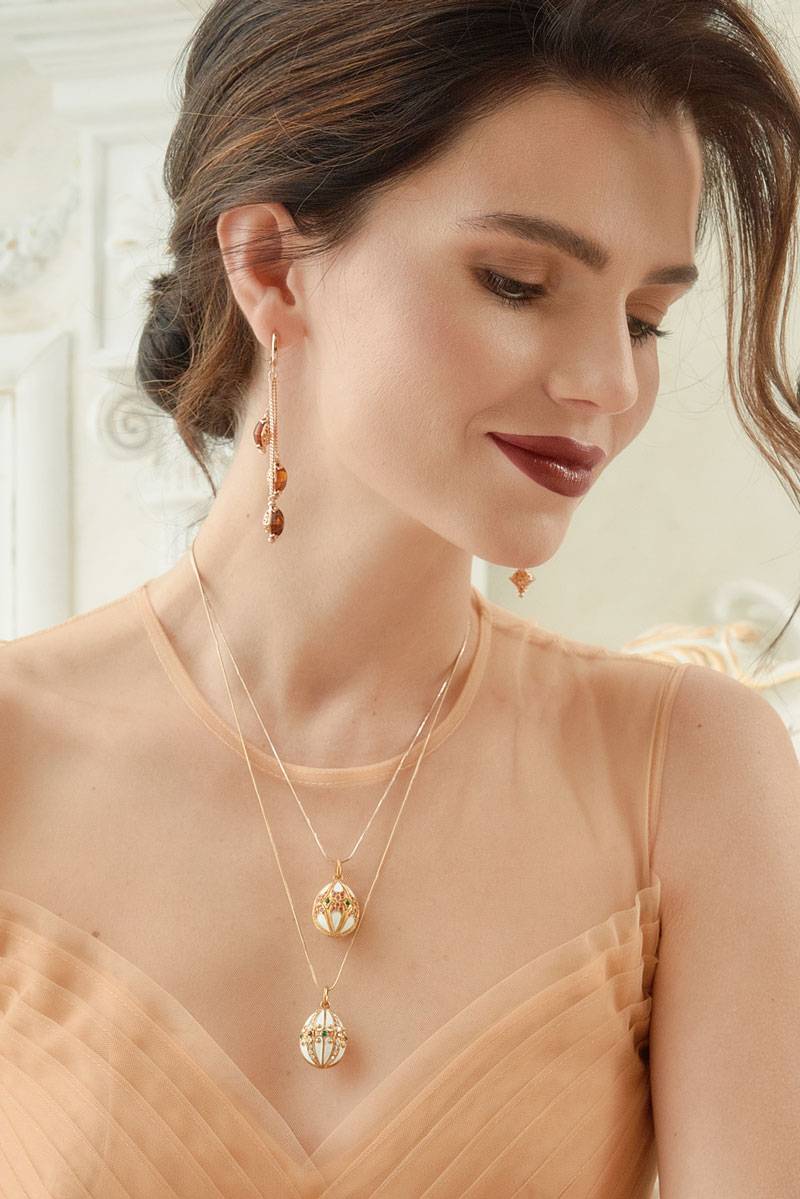 No two Faberge eggs were made the same, and they were carefully crafted so as to impress the recipient with a glamorous, personal touch. In particular, these gifts are incredibly important between two lovers, mimicking the special relationship of Alexander III and Maria, or Nicolas II and Alexandra, creating a permanent bond.

Deeply personal and indulgent, these pendants are to be cherished and kept forever. Such is their significance and worth, they’ll be considered a timeless and forever-romantic piece of jewelry.

But these gifts aren’t limited to couples. Instead, they also make for an outstanding and cherished gift for mothers, grandmothers, daughters, and even granddaughters.

The egg is a symbol of new life, of rebirth, of eternal spring after the coldest of winters. It signifies new rays of sunshine and hope. Giving eggs (in whatever form) as an Easter gift is a long-lost tradition in Russia. From her very first birthday, a young girl in 19th and 20th century Russia would be given an egg pendant every year on Easter, and would gather them all on a small thread.

You can bring back this luscious style and a piece of Russian tradition this year with a special, memorable present that’s certain to become part of your heritage.

ARE THERE DIFFERENT TYPES OF FABERGE EGGS?

We offer two different types of Faberge egg pendants, each of which can be worn in good health for two hundred years. They’re designed to be handed down through the generations — and what a story there is to accompany the gorgeous gift.

The first style of Faberge egg offered is “gulliouche” enamel. This a French technique of coating a layer of enamel over an engine-turned design placed on a silver base.

The next style is also an enamel one, so as to reflect the original Faberge design. The Old Russian Shaded Enamel design uses early Byzantine enamel craft instead.

The pendants are hand made with Sterling Silver 925, 18 Karate Gold Plat, and Swarovski Crystals.

This Easter, make your gift extra special and re-create a long-lost Russian tradition with Sapsana. These miniature pieces combine art, tradition, expertise, and precious materials in one extravagant and unique gift that symbolizes new life, strength, and love. 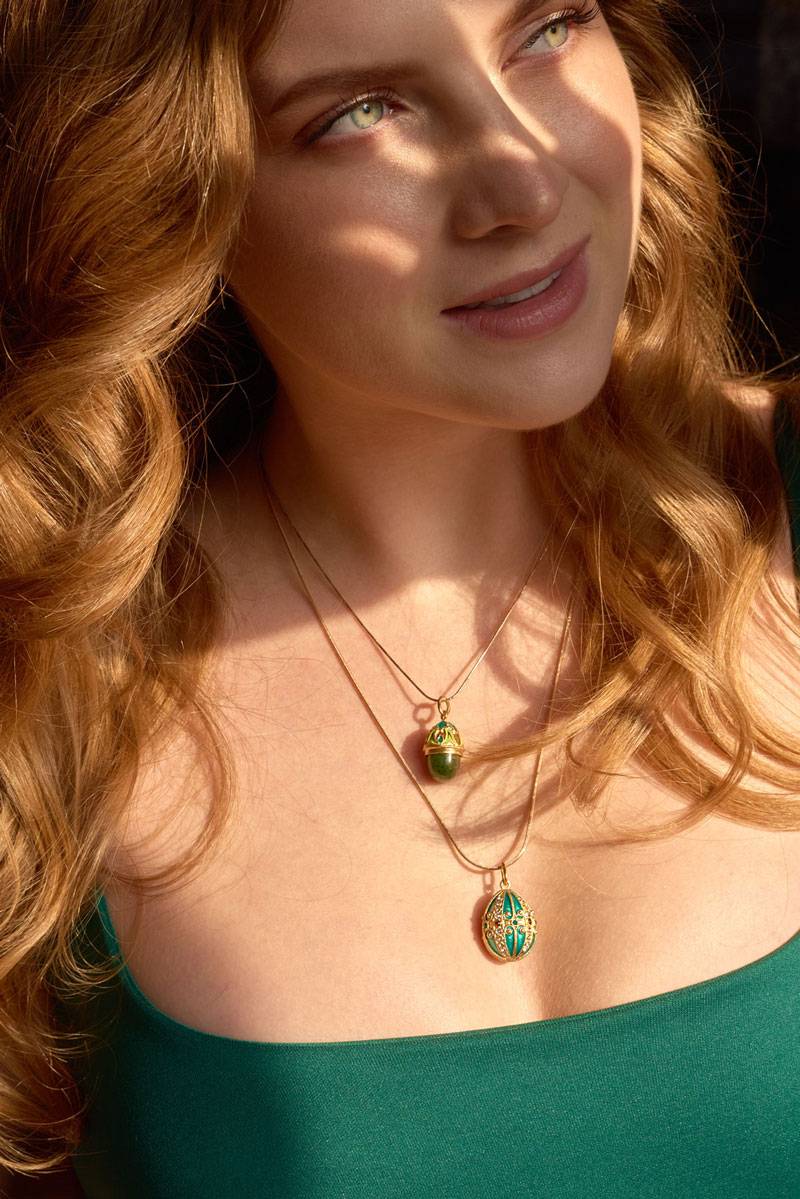